Natrol Kava Kava capsules [Amazon Link] are one of the most popular Kava herbal products available in capsule form on the market. These supplements are sold in health food stores, grocery stores, Amazon.com, etc. all over the world. So what are these capsules, what’s in them, and are they effective? In this Natrol Kava Kava Review, I will take a close look at this dietary supplement, examine its effectiveness and potency, consider the pros and cons of Natrol vs. some other products and methods of ingesting Kava, and give my verdict. 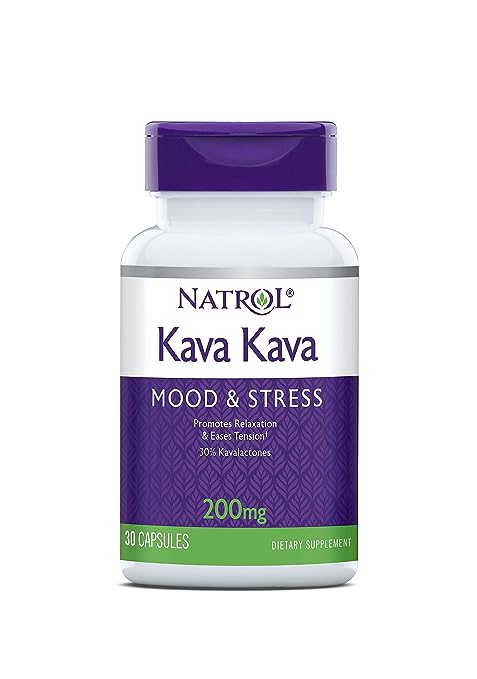 Natrol Kava capsules come in several different packages, though most commonly it is sold as a single bottle containing 30 Kava capsules. It is also sold in 3 packs, and in other larger bulk packages, which may be a little bit easier on the wallet, especially if you find yourself using kava frequently.

The nutrition label shows that the only active ingredient in Natrol Kava Kava is Kava, in a gelatin pill casing, though it doesn’t specify if the gelatin is vegetarian.

Also in this capsule are inactive ingredients like starch, rice powder, magnesium stearate, and silicon dioxide.

These capsules apparently contain 60mg of active kavalactones. The Yogi Kava Tea contains a little over 20 per bag, while a shell of traditional kava from, for example, a Bula Kava House strain, might contain 150-500mg of Kavalactones.

Taking or three of these capsules would give an approximate 120-180mg of kavalactones, which is on the low end of a single shell of traditionally-prepared kava. But this quantity of kavalactones is not nothing, and is far from the minuscule effects of, say the Yogi Kava Tea.

120mg of Kavalactones will likely numb the tongue and will give a mildly pleasant sensation of well being, similar to the effects of weakly-prepared traditional kava. These supplements may mildly reduce anxiety, and perhaps encourage sleep, though not powerfully so.

Even if several capsules are taken in rapid succession (which would likely cause stomach upset), users will not feel any significant psychoactive effects, and will certainly not become “krunk” (the popular kava-drunk portmanteau). Don’t expect a high from imbibing these capsules.

For use during the workday, as a sleep aid, muscle relaxant, and the like, these supplements may be a nice choice. There’s obviously no preparation, just swallow them with water and you’re good to go.

I note that these pills are pretty big, and aren’t fun to swallow.

There is no information as to where this kava has been sourced from, whether the kava is Noble or Tudei what types of kavalactones are present, etc. The Natrol bottle does specify that the extract is from Kava Kava Root, which is very important due to the hepatoxicity concerns outlined below.

Natrol is an outlier among Kava supplement companies, in that it does not supply any of this information. Several other vendors of kava kava capsules, such as Gaia Herbs and Herb Pharm, do specify their country of origin on the bottle. Additionally, some other supplement capsule companies identify that their Kava is of Noble variety. Though the FDA makes no distinction between Noble and Tuedi kava (it’s all piper methistycum to the suits in DC), Noble varieties have been used for thousands of years in the South Pacific, and while the general consensus on Tudei kava is in flux, the current wisdom is that it should be avoided.

Several years ago, when there was a previous boom in the popularity of Kava, there was a significant shortage of available Kava root to meet demand. Unscrupulous vendors began to create extracts and capsule-based supplements using parts of the kava plant that are not normally ingested such as the leaves and stems. Several people who took these contaminated kava capsule supplements had hepatoxic episodes (essentially, liver failure), and there were at least a few deaths caused by this contamination with parts of the plant not normally consumed.

The fact that the problems with kava were primarily focused around kava supplements and capsules makes me not a huge fan of imbibing kava supplements in general. While Natrol does specifically identify that their kava comes only from the roots, the lack of more specific information just does not fill me with confidence in these capsules.

If you’re genuinely curious about Kava Kava, it’s best to try getting some traditional root (such as, say Dua Na Bilo’s Fijian Waka Kava), or at least a micronized kava, from a reputable vendor. Learn about the true beverage that has been used for thousands of years, and kava will reward you. Yes, it doesn’t taste very good, but the effects of real kava are much more interesting than virtually all Kava supplements available, and Natrol Kava Kava in particular.

There’s very little information available about this kava, and given that Natrol is a huge company that sells a huge variety of supplements, they’re not focused on sourcing high-quality kava root, but rather just want to have a bottle that says Kava on the wall next to all of the other Natrol herbal supplements.