To properly use incense, you have to light it on fire — always dangerous! And usually, there are no instructions on the box.

Which side of the incense do you light?

For incense sticks, you ignite the thick end coated in resin, not the thin end. The exposed wooden stick helps it to stand. For incense cones, you’d typically light the pointed tip.

It may seem simple, but it is normal for people to feel confused about which side to light especially when it comes to backflow incense. I’ll tell you more about that below.

Which Side Of The Incense Do You Light?

Basically you always want to light the top end of the incense, but it depends on the format you’re using. Let’s break it down.

Stick incense, whether regular or backflow, should be lit at the tip where the incense ends, just as the image above shows. The bare wooden stick isn’t the side that you should light. When properly lit, the smoke will flow up and the pleasant scent will fill the air.

When it comes to cone incense, regardless of whether it’s backflow or not, you will always light the pointed tip.

For regular flow incense, you’ll see that the smoke travels upwards and fills the room with the aroma.

What about backflow incense? 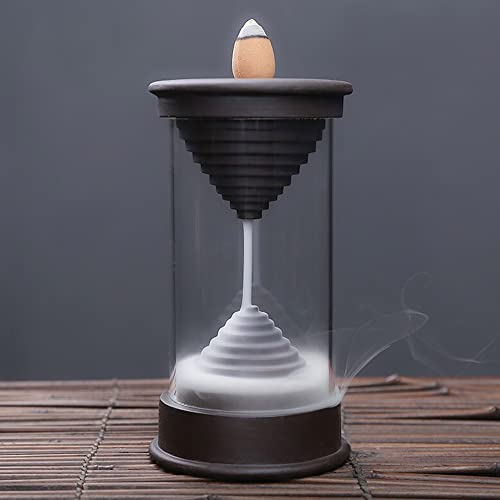 Same thing, you light the top section of the backflow cone.

When lighting your incense, make sure that you allow enough time for the incense tip to light up. Sometimes, people think that their incense is defective because it produces smoke but dies after a few seconds. The remedy here is to give your incense a few more seconds over the fire so it lights up and continues to burn.

When lighting your incense, make sure that you allow enough time for the incense tip to light up. Sometimes, people think that their incense is defective because it produces smoke but dies after a few seconds.

What Is Backflow Incense?

Due to the downward direction of the smoke produced with backflow incense, some people can get confused about which side to light. Whether the smoke rises or descends, you always light the same side for the incense.

Backflow incense is something unusual and fascinating, especially to those who see them for the first time. Usually, when you burn incense, the smoke from the tip will rise and dissipate.

The backflow incense is still made of the same materials used for regular incense but there could be minor differences to make the smoke flow backward.